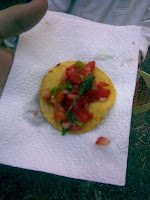 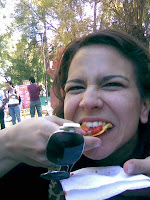 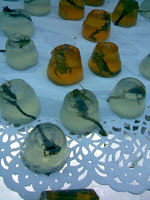 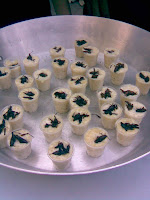 When I woke up yesterday morning I didn't remember it was Thanksgiving. Not until I went downstairs to have breakfast and I settled into my recliner to feed my newborn did I remember. It was Oprah who reminded me. She was making stuffing and a pumpkin pie with her friend, Cristina Ferrae. "A no bake pumpkin pie? Wow!" I thought as I realized I had no one to celebrate Thanksgiving with, besides my baby and my six year old. Nostaligia rushed over me and I sank into a Thanksgiving funk.
But then it dawned on me, I am not alone. Perhaps the Holiday Inn perpared something for those ex-pats who are always going to have thier "gringo meetings" there. I called. No luck. Then I realized that I would most likely end up taking my children to a restuarant, Chili's to be exact. I did do that but we also ended up at a wonderfull Thanksgiving dinner at a beautifull Mexican family's home. It was so moving for me to be able to celebrate a day that really does mean something quite important to me personally. This particular family has a son-in-law from the USA, who actually lived in my own hometown for several years. We reminissed of Thanksgivings gone by, snow, winter and cornbread stuffing. All while soft "balladas" played in the background. Thanksgiving Mexican style, we had the best of both worlds!
Publicado por Alma Maria Rinasz No comments: 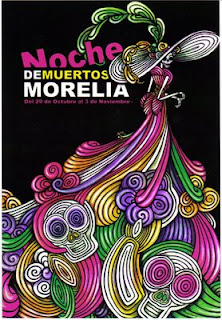 2008 Day of the Dead poster given out to tourists in Morelia. Very cool design.
Publicado por Alma Maria Rinasz No comments: 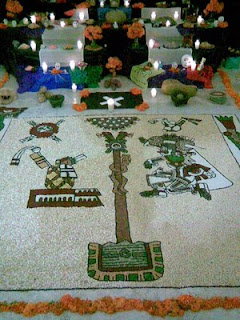 As promised, here are some images of past Day of the Dead. They are of altars in different places; schools, libraries, or on the street. (I don't have any photographs of cemetary altars but I do have video that I am hoping to upload very soon.)
The picutres shown are of: 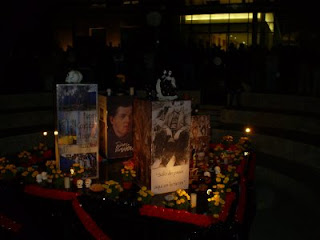 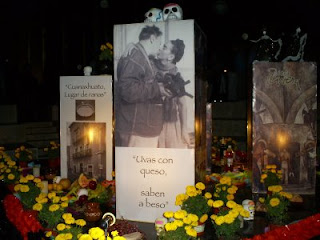 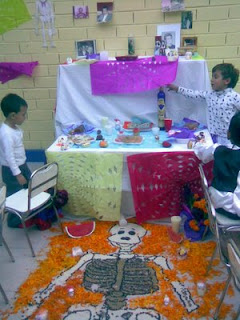 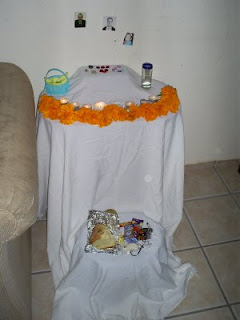 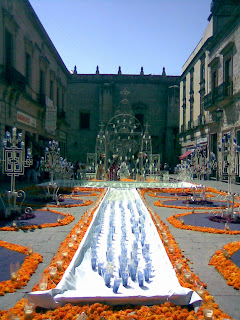 A lot has been said and written about Day of the Dead. My aim isn't to give a history lesson. I want to share some of my personal experiences with those who are interested in reading this blog. For the first time in almost six years I am back in Michoacan where dìa de muertos is a big event. Patzuaro (about forty minutes by car from Morelia) is ground zero and every November 1st it is flooded with both national and international tourists. Unfortunately I won't be one of those tourists this year, if I am lucky I will be there November 2nd to look at the remants of the candle light vigil from the night before. So here I go, I hope you enjoy this dear reader and maybe become interested in visiting Michoacan in the future. One last thought, for those who are unfamiliar with dìa de muertos I'll put some links (in Spanish and English) in too.
http://www.visitmorelia.com/
This site as an English and Spanish version and has all the information you want to know about viviting Morelia
Spanish language with Dìa de muertos content
http://blogs.eluniversal.com.mx/universitarios/
El Universal is a large newpaper publication in Mexico. This is the blog dedicated solely to university students.
http://www.umich.mx/mich/cultura/noche-muertos/
The Universidad Michoacana de San Nicolas de Hidalgo has a website dedicated to the history and culture of dìa de muertos in Michoacan.
http://www.cultura.michoacan.gob.mx/
The Secretaria de Cultura should have more information than they have right now on the site.

English language with Day of the dead content
http://www.mexconnect.com/mex_/muertos.html
Mexconnect is the website to look to when you need up-to-date information on life in Mexico.
http://www.dayofthedead.com/
I have two of these books that this author published, her books introduced me to the tradition before I was able to actually go to a cemetary and see for myself.
.
Publicado por Alma Maria Rinasz No comments:

Email ThisBlogThis!Share to TwitterShare to FacebookShare to Pinterest
Labels: Day of the Dead, Día de Muertos

Since I last sat in front of a computer updating my blog a year has come and gone. I moved from Guanajuato to Michoacan (kind of like moving from the USA to Mexico, Guanajuato is "first world" and Michoacan is "third world"), I started my master's in Communication and Educational Technologies and I had a baby. All in that order.

As a part of my master's I have to set up a blog, which you can see by going to http://www.rochesterfolio.blogspot.com/ A word of warning though, it is all in Spanish.

Being in the mist of Fall and on the doorstep of two of my favorite holidays, Halloween and Dìa de Muertos (Day of the Dead), I am compelled to begin getting this blog in order and putting into words all the wonderfull experiences I have had over the past eight years with these two fascinating holidays. But one thing at a time; I have to take baby steps because I don't have a lot of time to spend on this blog. Hopefully by the end of this week I'll have added some footage (video and photos) of how Halloween is celebrated in Leon, Guanajauto and how Dìa de Muertos is celebrated in Michoacan. Here's to good intentions... CHEERS and SALUD!
Publicado por Alma Maria Rinasz No comments: