Getting the Most out of Morelia's Film Fest 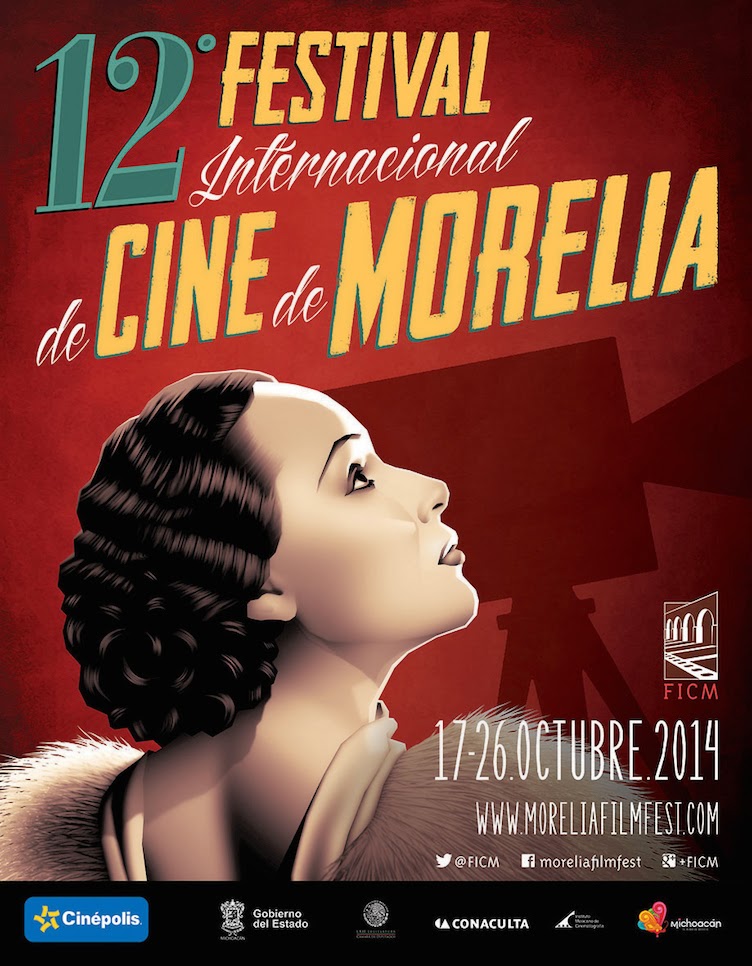 With each passing year, El Festival Internacional de Morelia (FICM) grows in reputation and Twitter followers.  Here are some insider tips to get the most out of Morelia’s Film Fest (October 17th to the 26th).

Tickets, tickets, tickets
There are several ways to get tickets, directly online at Morelia's Film Fest's official site,  Cinepolis Centro or Plaza Las Americas.  You can buy a cinebono: 4 tickets for $140MXN at Centro and Las Americas but you still have to exchange each ticket for a ticket to the particular film you want to see.  There are also free screenings, the first slated on the program is Roberto Galvadon's 1947 La Diosa Arrodillada in Plaza Benito Juarez. Events programmed in Patzcuaro, a real gem in Michoacan's repertoire of colonial towns, also appear on the festival's official website.

"The Most"
Time to spare before the film starts? Want to run casually into or rub elbows with actors, directors, producers, glitterati inc. who are also at FICM? Make sure you hangout downtown, past party venues have included La Casa Grande, defunct restaurant La Conspiracion, and Palacio de Gobierno, where this year's inaugural party is most likely to take place.

Past party sites and celebrity sightings include local hot spots like Tata Mezcaleria (rumors have that Tata has already been reserved for several production parties), El Abrevadero, SAK and La Monina (usefully located across the street from Cinepolis Centro), El Jardin de las Rosas, Los Portales where you can find one of Morelia's most talked about restaurants, Lu, located in Hotel Casino.

Last year I ran into Alfonso Cuaron at Casa Grande. Visit its sister business, Trico, a delicatessen/restaurant,  for coffee, desert, tasty food or a drink at the sidewalk cafe

However,  the best answer I've heard so far as to how to get the most out of FICM came from a local resident and former FICM collaborator (who shall remain anonymous).  How can you get the most out of Morelia's Film Fest? "See all the films you can.

Which film did you enjoy seeing the most? Who did you run into at FICM? Share your comments here below.

Veronica Loaiza: In the Face of Corruption

Quirky, passionate, controversial.  Three words I would use, without hesitation, to describe Veronica Loaiza.  We met several years ago at an art show she was organizing.   Since then I’ve come to know her as an artist and an active member in our community.  Recently, she’s been caught up in a media scandal after Veronica denounced two politicians for misdoings.  She has since moved away from Morelia as a result of threats she says she’s received.  Last month I had the chance to interview her and ask for her side of the story.  For more information, click on the links in the interview (most of the links are in Spanish).

It’s a sunny Friday morning when Veronica Loaiza answers my Skype call.  Veronica has had a rough couple of months.  She’s in the middle of a media scandal after blowing the whistle on two politicians, Congressman Ernesto Nuñez, and Mayor Juan Carlos Campos.  She’s openly denounced both elected officials for acts of collusion and fraud after working with them for several months planning a cultural festival for the small Northeastern town of Zitacuaro. “Everything turned out different than the way we had planned it,” she begins, “because of the situation of corruption that exists in Mexico.  And as it turns out, as in my case, those of us who decide to execrate acts of corruption end up suffering a backlash from those in power.”

Loaiza left Morelia; she explains “I’m fearful for my safety.  Those concerned with my safety have told me that Juan Carlos Campos has taken drastic measures against those who have spoken about his acts of corruption.”  She continues, “maybe I should have looked into what kind of people I was dealing with before working with them, maybe I should have asked more questions…” her voice trails off.  “There are people in Zitacuaro who have gotten in touch with me to tell me that they are really upset about this situation, that the Mayor is a criminal…”  In an open letter to the people in Zitacuaro, Loaiza states “this situation where federal funds [are being misused] is regrettable, we could have had an entire arts festival for the whole community, and now everything is unsure.”

Even before graduating from Michoacan State University in 2003 with a degree in architecture, Loaiza was involved with the arts.  As a young child, she studied painting, often tagging along with her mother to classes with Alfredo Zalce. After entering college, she started organizing art shows. “I’ve been networking for years, trying to get these types of cultural events together.  I’ve worked with Veronica Bernal with Music Festival, Andrea Finck in the Marinette Festival, Marco Antonio Zavala at AMANC (where she is currently overseeing art therapy  project for children with cancer), The Children’s Hospital, as well as teaching at the School of Architecture at the state university.”  Veronica is passionate about art; it shows through her work, which of late has been with her not for profit Contenedor de Arte.

Loaiza's creation Julian Velazquez, brought to life on Facebook pagesAlmost as an allusion to Veronica’s professional life working with influential politicians, “As a child, my mother would buy Vanidades. At the back was Corin Tellado’s section, basically a novela, where she would write about different romantic situations involving women.”  Loaiza explains “one day I was in a bar with a friend and across from us, a couple, a man, and a woman, were sitting together.  It was clear from their body language that they were in some kind of romantic relationship.  The man, in his mid-fifties, was wearing a suit and tie, he looked like the typical politician or public servant, while the woman, about twenty years his junior,  could have been his assistant. 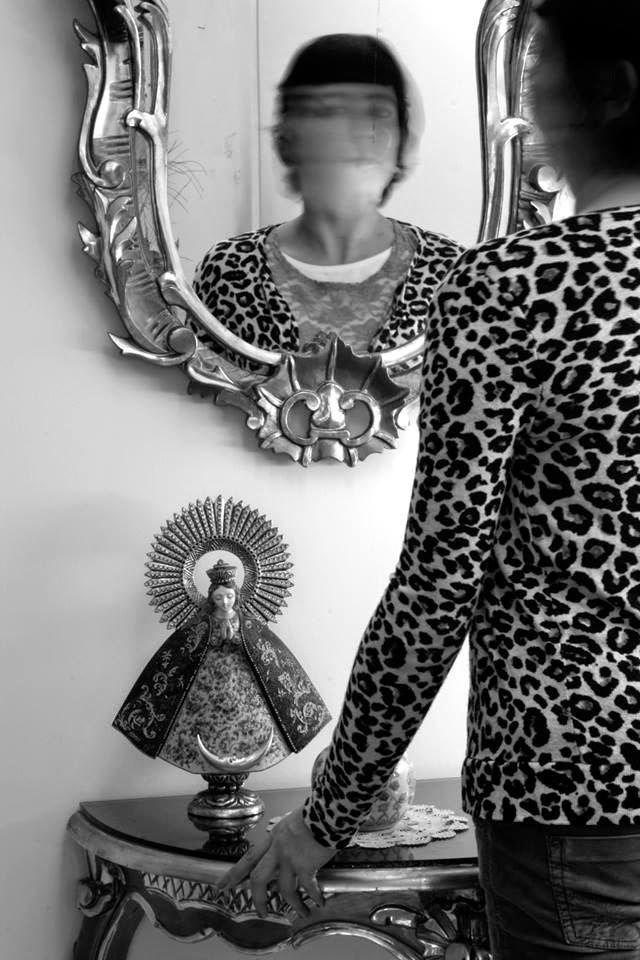 My friend and I began a dialogue based on the impression we had of these two people; we named the man Licenciado Julian Velazquez and the woman, Carmelita. Their relationship was based on the fact that Julian Velazquez, who is married with children, can and does use his position of power to help Carmelita advance in her career.  Carmelita has the material wealth that she has thanks to her romantic involvement with Julian Velazquez and does not mind that he is married with children.  After that, I began posting things on Facebook about Licenciado Julian Velazaquez as if I were Carmelita.  These types of situations are so common that they are cliché.  People began reacting to my posts, either taking it as a joke, judging me, or asking if it was true.”  Loaiza explains that any resemblance to reality is mere coincidence “it touched a nerve in some people, they see themselves reflected in what I was posting.  It’s been funny and interesting how people have reacted to this story; people have even asked me how my relationship with Licenciado Julian is going.  I am not interested in having a romantic relationship with a man the same age as my father.  There are plenty of women who are, which is their personal decision, I’m not trying to make a moral statement, and this is just societal reality.”

Loaiza’s art performance on Facebook took on a new level when “it got to the point [where] people would go up to my parents and say I was in a romantic relationship with Ernest Nuñez based on these posts.  That was a way to cast doubt on my moral integrity, which has nothing to do with the fact that these politicians want to keep four and a half million pesos for themselves.”  Loaiza continues to explain that “it turns out that after the fact, they presented the plan for the arts festival to CONACULTA.  Which ended up auditing the project and it turns out that they (the Congressman and the Mayor) had inflated costs about 60%.”  What will come of all this? Not much for now, since most elected officials in Mexico have what is known as fuero:  immunity from any criminal proceedings.

Art as an act of protest

“My past work has focused on cultural and societal critiques, and since this has happened, I will focus my work on art as an act of protest against corruption and violence.”  Loaiza is not the first artist to protest violence and corruption in Mexico, and she most likely won’t be the last.  What are her hopes for Michoacan?  It’s difficult for her to come up with something positive, she’s been through too much in the past few weeks to feel upbeat.  But she adds “Morelia, Michoacan for that matter, is full of hardworking, honest people.  Many of them are sick of this institutionalized corruption.  It is up to us to change it, but I am not sure how.  It is going to take a long time, generations even, for all of us to stop normalizing corruption.”  “But do you think it is possible?” I ask her.  “Sure, it is possible” she sighs, “it is just a matter of us, those of us honest, dedicated people, to want to do it.” 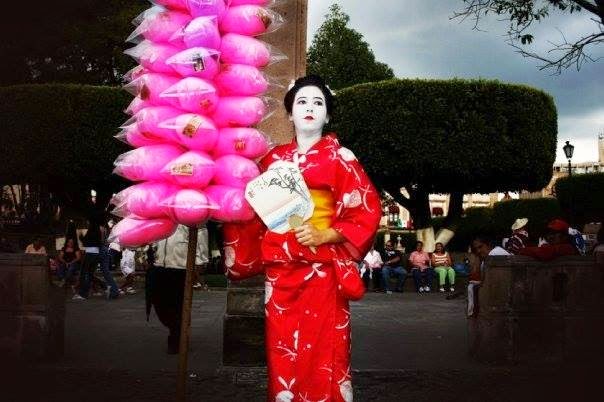 She's right, corruption didn’t happen overnight, but it is on each one of us to, as the saying goes, to stamp it out from our trinchera (trenches). Veronica Loaiza has done just that.  She spoke up, spoke out and told her truth about a situation that is all too common, all too frequent.  It is up to the rest of us to continue the conversation, to ask ourselves on a daily basis “what can I do today to make my community a better place to live?” That is how we can change things that we don’t want, like corruption in our communities. Which leads me to the moral of Veronica Loaiza's story as she has faced corruption: Real change starts from within.
Publicado por Alma Maria Rinasz No comments: